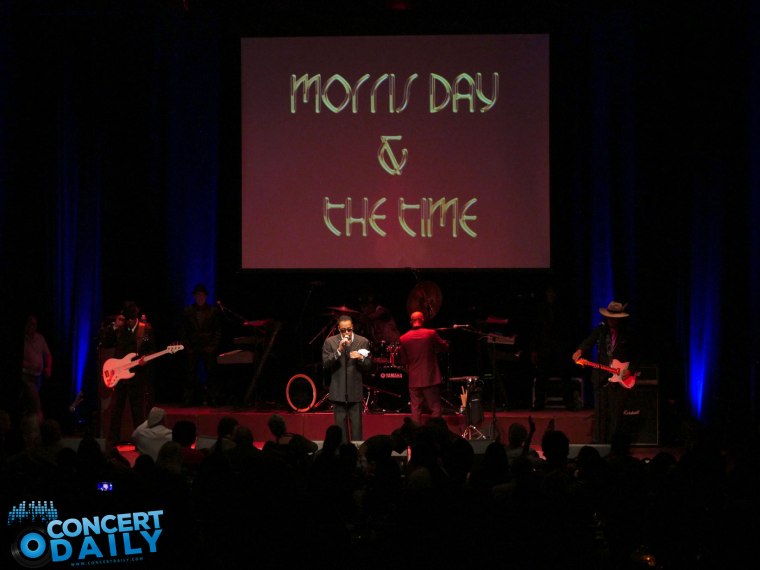 Ok, where are all my 70’s/80’s babies out there? Don’t all raise your hand at once, but you should because this post is directed towards you. Do you all remember a time when music was dominated by Prince and ALL of his associates and the Minneapolis sound of funk rock? If you answered yes to this question, then why weren’t you at the Bethesda Blues & Jazz Club last Friday?

Morris Day & The Time brought the sound that defined the entire 1980’s to Bethesda, MD as a stop on their national tour, for not one, but two shows. For a lot of artist these days (especially the younger ones), doing one show a night is a taxing situation, but when you’re a veteran in the music industry, being able to body multiple shows in a night is a piece of cake.

During the hour and a half show, Morris Day took us on a musical journey that to the core of things, just makes you feel good. I go to a LOT of concerts to take pictures and review the events, but I can count on one hand how many times I’ve been captivated to the point of coming out of “work mode” and start grooving to the tunes as if I was a fan, and this was one of those moments. Each song literally was a back to back jam that I remember my parents playing as a child growing up.

Halfway into the show, Mr. Day wanted to bring the ladies up on stage, and BOY, did they go flocking. I’m used to seeing the young girls jumping barricades and hopping on stage when a rapper wants to bring females on stage, but tonight, it was all about the seasoned women. Those ladies who have aged like fine wine along with the music that was being played tonight. One of the participants stole the show though! Mama Sandy from Washington, DC took center stage and showed out for the 60+ crowd when she dry humped guitarist Tori Ruffin WHILE he was still playing. It was totally a sight to behold.

Not to be one to forget his roots, several times throughout the show, Morris took a few moments to stop playing one of his numerous songs, to get into classic hits by his mentor Prince. You could feel the emotion being conveyed as these songs played, with the Purple One’s death still looming over us. If there is anyone who could do his songs justice, it’s someone who was once in his inner circle.

It came to the point of the show when the crowd was asked the infamous question “WHAT TIME IS IT?!”, which immediately brought out a brigade of flapping arm gestures, to signal that it was indeed time for “The Bird“. What is known to be his staple song, and one of the tracks lifted from the iconic classic move “Purple Rain“, this was also the song that first introduced me to Morris Day and The Time.

This performance again showed that he loves to interact with his audience, when even more folk were invited on the stage. The setting of the Bethesda Blues & Jazz Club was perfect for this event, because it said classic, sophisticated and smooth as fine wine, and not to mention intimate, all things that Morris Day tends to exude.

Previous: CD First Listen: Washington D.C.’s Own Funsho Drops Some “Prezzy” Knowledge This Election Year
Next: ‘Starboy: Legend Of The Fall’ 2017 Tour Is Announced By The Weeknd

Since the tender age of 4 years old I have always dreamed of being able to see one of my top three favorite songstress...

#FlashbackFriday is ALWAYS a constant mood because it reminds of those REALLY good times in life. I tend to equate my good times in...
All 128 Articles