Home » Review » Have You Recovered? Meek Mill And Others Broke The Internet In Washington, DC

Yet another summer has technically come and gone, and all the while we are still holding onto most of the memories that we made, there’s still a chance to take advantage of the dwindling days of nice weather to create new ones. Insert the inaugural Break The Internet Festival that took place just this past weekend in Washington, DC.

With what was one of the hottest days of the season, the temperature sure didn’t stop over 4,000 millennials from packing out the Gateway Pavilion in South East D.C. on Saturday, September 10, 2016. A burning question that I’ve been wondering is, why is it that some of these promoters choose to hold these outside shows when the heat is turned up to oven hot? I mean I know that they don’t have any control of it, but it seems like too much of a coincidence that it chooses to be 95 degrees and above at most of these outside events that we’ve covered lately.

It’s always interesting to see music festivals start out at their very beginnings, and I had the honor of saying that I witnessed the VERY first Break The Internet Fest. With some new festivals, people are a little shy to attend because of the sheer fact of the “unknown”, but that totally wasn’t the case because of the powered up lineup. The organizers had tapped some big names in the rap game to tackle this show…Meek Mill, Yo Gotti, O.T. Genasis, Jacquees, Dreezy, Kent Jones, Reesa Renee were all there, but we were treated to a few special appearances too.

The show officially started at 3 PM with a few local DMV acts to help welcome the crowd in. To our surprise, quite a few people had already started arriving relatively “on time”. The festival DJ kept the tunes pumping while people walked around the grounds of DC Gateway, and while music was the main focus, there were also vendors on site, as well as a nice variety of food trucks.

Unlike most music festivals, this one came with a purpose. The underlying reason for this show was to honor those striving for academic excellence. Co-founder Mia Fields-Hall says “(The) Break The Internet Fest was created to give college kids a chance to continue their education without financial stress and to encourage them to go above and beyond their dreams.” This was no more evident than when $2,500 college tuition scholarship was awarded to a graduate student at Virginia Commonwealth University.

Around 6 PM is when the event really got popping, when the DMVs own Reesa Renee took the stage. She brought with her the usual upbeat R&B vibe that we can expect from this young lady. It’s always a good time when you invite Reesa to a party.

Following her set was a female rap group who have been garnering some nationwide attention, most notably for their introduction to the world via Love And Hip Hop New York. That’s right, BBOD come through. I can be honest, I was REALLY interested in seeing the presentation that they were going to provide. We’ve seen snippets of their talents on the show, but you really can’t make a full opinion on that, but they shocked me though. “Moe Money” and “Sexxy Lexxi” came rolling out on stage, accompanied by 4 dancers and rocked out for their 10 minute set. Their show kicked off with a song that used a sample of Cyndi Lauper’s hit ‘Girls Just Want To Have Fun’. 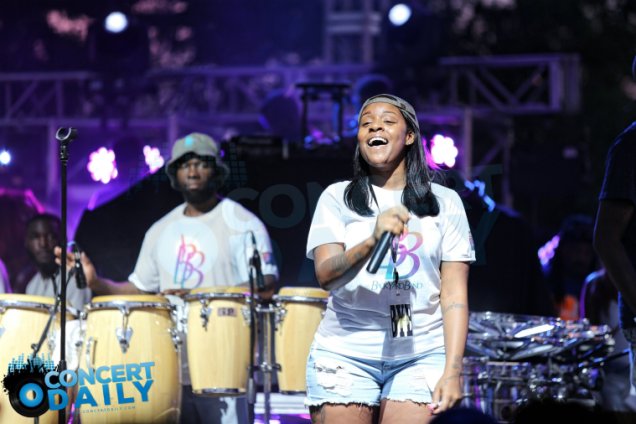 DC’s own legendary “Backyard Band” followed, bringing the local go-go flavor to the show. This was a welcome departure from the rest of the show that heavily relied on current hip-hop music. Granted most people in the audience were WAY too you to have been to a gogo back in the day, BYB def brought that vibe to the park.

Rapper Kent Jones picked up the pace on the hip-hop front, performing an energetic set. At some point during his show, minor technical difficulties happened where the lights went off, but as a true professional he kept going. He closed out with his hit ‘Don’t Mind’, which samples Barry White’s ‘Practice What You Preach‘.

Chicago based femcee Dreezy made her DMV debut at BTI Fest, and she was well received. Playing a festival as new as this one proves a well calculated move for her, as she drizzles her brand of artistry on an East Coast audience just two months after the release of her debut album. The crowd totally got into her performance when she sang her single ‘Body’, which she recorded with fellow Chicagoan Jeremih.

One of the ‘it’ artists in the trap sub-genre of hip-hop is undoubtedly O.T. Genasis, who was introduced to the masses back in 2014 with his hit song ‘Coco‘, which of course he had to sing on stage.

He even hopped off stage to be closer to the crowd, and you know the fans ate it up, but they REALLY were lit when he performed his current radio banger ‘Cut It‘.

When asked who the crowd was there to see, surprisingly the biggest response was for Cash Money Records‘ Jacquees. The entire place erupted once he hit the stage. Donning an Immature throwback t-shirt, he got right to it. At first look, I thought he was about to come out on stage to rap, that was until he broke out into a few 8-counts while singing live. Even though I had a front row seat in the pit, I could barely hear him  over top of all of the screaming women in the audience. Unfortunately his set was laden with more technical difficulties, such as both the lights and mic went out, but you wouldn’t have been able to tell as his stage performance kept right on rolling.

The show was starting to wind down when the first co-headliner Yo Gotti took the stage. Man, I honestly forgot how many radio hits this dude had.  He’s worked with so many artist and seemed to stay relevant for the past 16 years that he’s been making music. Opening his show up with the anthem that is a clear nod to his haters, ‘F.U.‘ is a song that so many people can relate to, not to mention the beat goes hard.

One thing that I noticed and loved about his set was that he was the ONLY act to come with live instrumentation. Albeit it was a drummer embellishing the music that his personal DJ was playing, sometimes all it takes is the beat of a drum to bring music to life.

The highlight of his show without a doubt was when he performed ‘Down In The DM‘, which thanks to Gotti, has made it a little more acceptable for it to ‘go down’ in the DM on the gram. As he neared the close of his show and the time started to get later, a quick switch off occurred when a not quite performance ready Meek Mill entered the stage to join his friend. Meek announced that he came out in a pair of shorts and a Louis V because of the annoying DC noise curfew that shuts concerts down at 11 PM.

With the limited time, Meek got right to it, playing a number of album tracks for his real fans. Midway through, he invited D.C.’s own Shy Glizzy onstage to perform a remix to ‘Cut It‘, which I’m surprised that O.T. Genasis didn’t come back out on stage to to really get it popping.

You could tell that he really didn’t care about the curfew since the time was nearing the 11 PM mark, and Meek was down in the crowd getting in touch with his fans. Giving 5’s, taking selfies and outright doing things that most artist with major platform forget to do. He even summoned for his cell phone and took some Snapchat footage.

The show ended rather abruptly as all the artist on the stage kind of just disappeared, and Meek was swept away. There were no closing remarks, no thank you’s from the host or anything, and security began clearing out the festival grounds.

Though there were a little mishaps here and there throughout the day, which is expected of ANY concert festival, it’s safe to say that the first annual Break The Internet festival went off without a hitch and was a success. Now that the first one is out-of-the-way, and lessons will be learned, I’m really interested to see what next year’s show will offer.