Soul balladeer Anthony Hamilton, along with Lalah Hathaway and Eric Benet brought his What I’m Feelin’ Tour to Downtown Baltimore, on what felt like the first true Fall night of the season. The air was cool and crisp, the sky pitch black by 7:30 PM, but that didn’t stop folks from coming out to see this show. This particular show was one where I truly got to see age categories mesh so perfectly. On one hand you had your dapper dressed older gentleman who took their similarly elegant wives out for a special evening, which was low key pushing past their bedtime, and on the other hand you had the younger crowd which encompassed the couple who were probably out on their first date together.

This was the fourth night of the tour, and already I could tell that this was a pretty well oiled machine of a show. Sometimes when a tour kicks off, you have many timing issues, mainly with the show starting at its proper time and cues for each artist taking the stage, but I witnessed none of that. 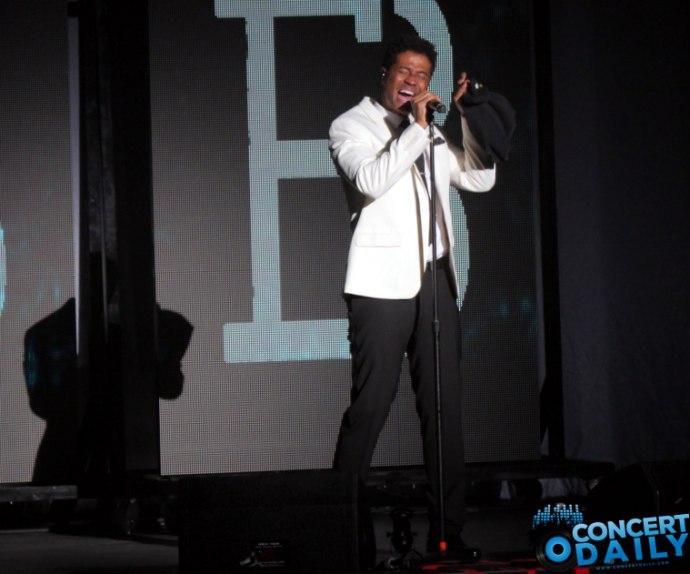 At approximately 7:30 PM, the first act of the night, Mr. Eric Benet took to the stage.  Accompanied by just a pianist and one female backup singer, he came to show these young R&B dudes how it’s done, that you don’t need overproduced beats and some no-named rapper to captivate a crowd. A lot of times when you don’t hear from an artist, you tend to forget the impact that they once had in music. When Eric started going through his back catalog, I had totally forgot about a number of those songs, but feel even worse that I forgot that HE was the curator of those songs.

His standout moment for me was when he sang his duet with Tamia, “Spend My Life With You“, which he performed with his only background singer. It was this song that took me back to being in high school, but also took audience members back too. You could look through the crowd and observe how couples gazed in each others eyes and gently grabbed one another’s hand while whispering the lyrics.  Let’s not get it twisted though, nostalgia wasn’t the only thing that he was playing on for the night. He was there with new music to support his new self titled album. His set closed out with “Georgy Porgy” as he walked down into the crowd to interact with fans. 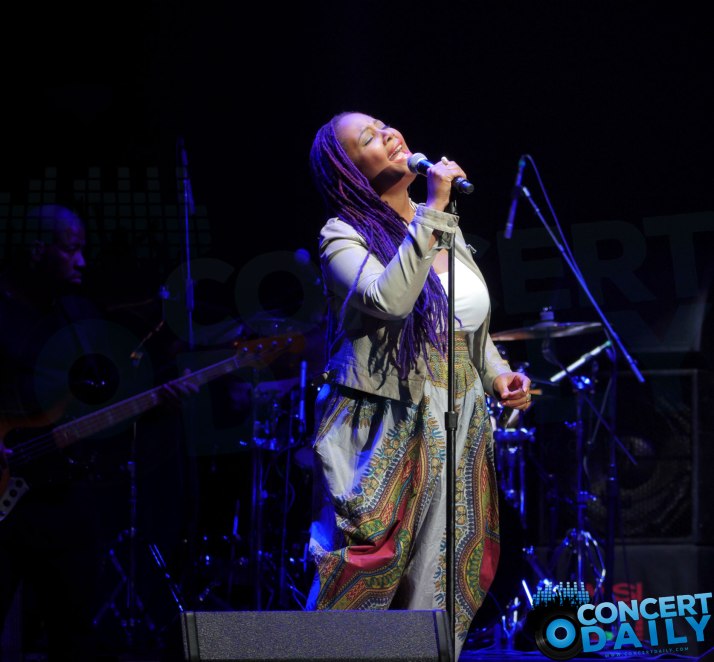 DJ Spark hit the stage to pump the crowd up, in what also acted as a smooth transition from Eric Benet’s set, to the next. She filled the Lyric with old school jams that had people dancing in the aisle and forgetting about their worries, but it was also getting them hype for the next performer, Ms. Lalah Hathaway. This was my second time seeing her in concert this year, and I was just as excited as the first.

She strutted out on stage to roaring applause from the audience, which wasn’t any surprise to me, and kicked things off with her single “Little Ghetto Boy“. It was rather touching to hear that song performed live, especially during the current times that we live in, because of what she sings should be an inspirational anthem to those little ghetto boys of Baltimore City who experience numerous levels of strife on a daily basis. One observation that I made about her onstage appearance was the inclusion of the African print in her pants, which has been her theme in regards to wardrobe for this tour run. To me it says that she’s extremely proud of her African heritage, and wants everyone to know that her black is beautiful!

On this rather chilly October night, Lalah’s voice was the instrument used to help keep us warm, and comfort our souls. About three songs into her set, she took a pause, stepped away from the microphone, and took off her shoes. As we’ve learned from history with other women in the music industry, when they kick their shoes off during a performance, that’s when things REALLY get serious! 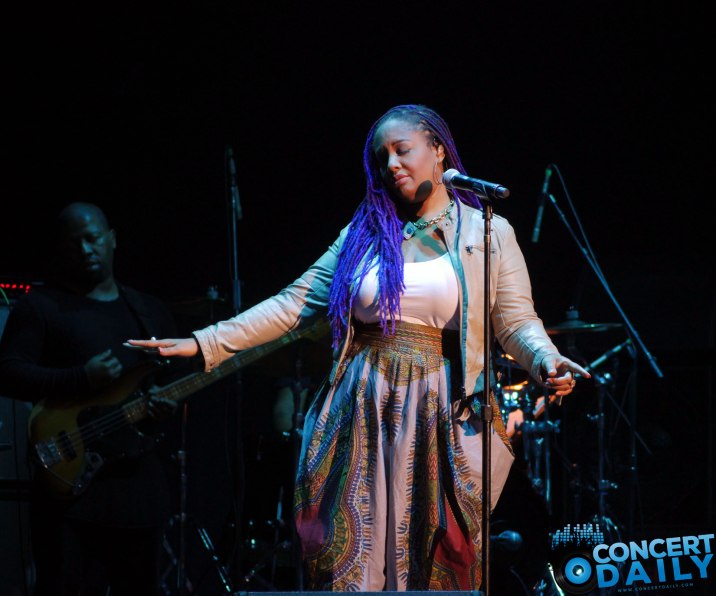 At this moment she gave us soulful tune, one after another, and transporting us back to a time when music was actually GREAT. She took us to church, jazz clubs via her scat section didn’t forget to let us know that she has a album out, “Lalah Hathaway: LIVE“, that you can purchase at all major music retailers.

Once the opening note and keys to “Forever, For Always, For Love” kicked in, women absolutely lost it. Hands waving in the air, resounding yells of YES, and deep filled sighs of emotions was an evident sign that her music has a tight connection with the people who receive it.Watching the audience members seemingly get lost in a trance from every word that was sung cemented the fact that she not only did her job well, but captured a few new fans along the way.

Her presence on this tour was well warranted for bringing the female mojo, which is often times very much missed on a male dominated bill. 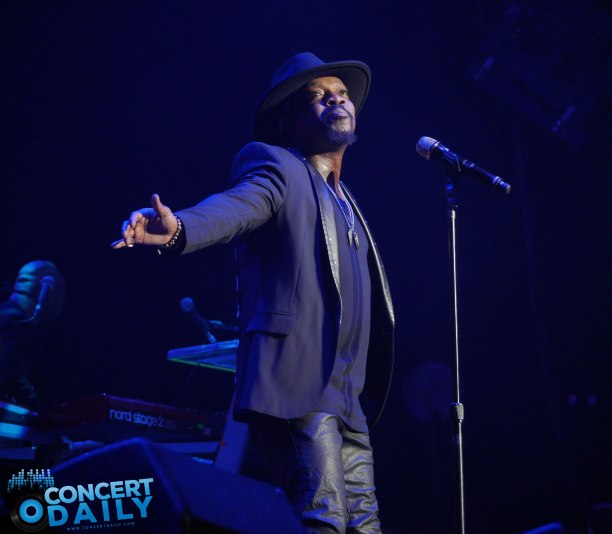 Anthony Hamilton came out last to close out the show, after all, this WAS his tour. The North Carolina native brought the southern hospitality that we often miss out on being in the mid-Atlantic region of the country. Backed by a full band, who was extremely on point might I add, and his background singers, The Hamiltones, there was no stopping this man.

If you’ve never been to one of his shows, then you must not be a fan of sanging, because he is the modern day epitome of just that. Everything that he sang was so full of passion, and genuine raw talent, that he made you feel exactly that. I had the same “full” feeling that I would get after eating a Sunday dinner of fried chicken, mac and cheese, some collard greens and cornbread at my grandma’s house. 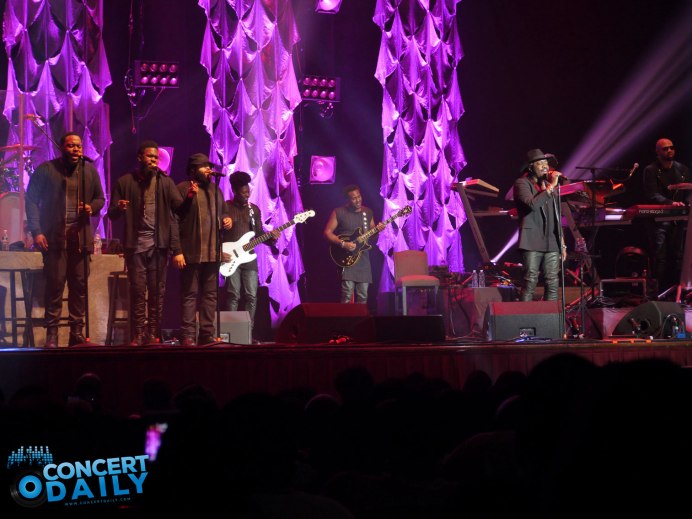 Something that I picked up during his show was that he doesn’t cut many of his songs short. I’ve seen it time and time again in concerts where an artist will chop of their songs to a 30 sec snippet to fit into a medley, but what we experienced in Baltimore were more like an album cut of the songs, which I personally prefer. Old classics were performed, but he wanted to focus more on tracks from his new album, “What I’m Feelin’“, which is currently in stores right now.

Did I already mention that his band was on point? We here at Concert Daily go to a LOT of concerts, and one of my pet peeves  is either the lack of a full band, or the lackluster quality of the band that is present. I had NO complaints at all from the band that backed Anthony, each song was so rich with live embellishments, that it took it to a totally different level. I don’t remember who his MD was, but these other artists out here today should be giving him a phone call.

The tour rolls on until October 30th, so if it comes to your town, make sure you grab a ticket because it’s something you def want to see.

Previous: PARTYNEXTDOOR And Jeremih Are Set To Travel Out On The “Summer’s Over” Tour
Next: The Flames Were Too Hot To Fan At Bowie State’s Homecoming Throwback Concert